the most dangerous idea ... 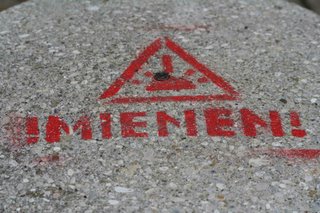 ... is so different to whom ever it is quoted from. Again the world question centre gives so much input on how people from all over the world think and act. This year, the third culture thinkers in the Edge community have written 117 original essays (a document of 72,500 words) in response to the 2006 Edge Question — "What is your dangerous idea?". Here you will find indications of a new natural philosophy, founded on the realization of the import of complexity, of evolution.
Here is one example from Seth LLoyd. Read his profund version of "No risk - no fun".

The most dangerous idea is the genetic breakthrough that made people capable of ideas themselves. The idea of ideas is nice enough in principle; and ideas certainly have had their impact for good. But one of these days one of those nice ideas is likely to have the unintended consequence of destroying everything we know.

Meanwhile, we cannot not stop creating and exploring new ideas: the genie of ingenuity is out of the bottle. To suppress the power of ideas will hasten catastrophe, not avert it. Rather, we must wield that power with the respect it deserves.

Who risks no danger reaps no reward.