why we (should) fight 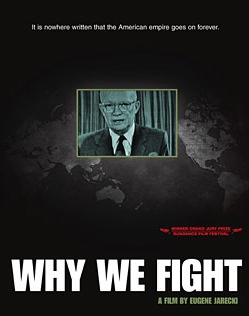 An unflinching look at the anatomy of the American war machine, weaving unforgettable personal stories with commentary by a “who’s who” of military and beltway insiders.

The film surveys the scorched landscape of a half-century’s military adventures, asking how and telling why a nation of, by, and for the people has become the savings-and-loan of a system whose survival depends on a state of constant war.